I haven’t come across the story of Bob and James previously, but this looks like a must read for a cat lover … thanks for the review John – now for my first attempt at reblogging….

I’ve just finished reading my first print on paper book this year. Cover-to-cover reading, that is – I still refer to printed books professionally and I still produce them in my own publishing business. But other than that, it’s been Kindle all the way for personal reading until this week.

The odd book out was A street cat named Bob: how one man and his cat found hope on the streets, by London street busker and magazine seller James Bowen, published in March by Hodder and Stoughton. Liz saw it in the Martinborough Library and knew she had to bring it home. We once had a large much beloved cat named Bob and he was red, just like Bob in the book. Our Bob was a red Burmese and the book Bob was a red tabby but a red cat is a red cat, particularly if it’s called Bob. 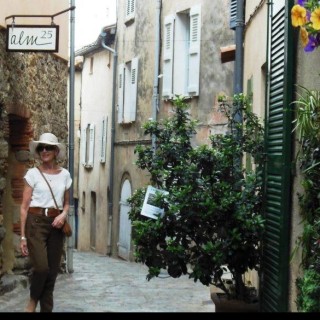 The Hera Temple at Paestum, Italy -it is outstanding

Squished into the Ape
Vicki Archer

travel tales and other serendipitous things....

travel tales and other serendipitous things....

A South of France Blog

Paris and France by Oliver Gee

Blogging about Italy and all things Italian

Meandering along the cobblestone and travertine to somewhere...

Wish YOU Were Here